The disposal design benefited from the technical experience accumulated at the the first repository, the CSM, where several concepts were tested during the operational phase of the facility life.

Located in the department of Aube on the territory of the communes of Soulaines-Dhuys and Ville aux Bois, the CSA is situated about 200 km southeast of Paris and 60 km east of the city of Troyes. The facility borders the northern edge of a 3 000 ha forest, mainly belonging to Soulaines-Dhuys (see Figure 1).

The CSA covers 95 hectares, 30 of which are dedicated for disposal.

The repository site has been selected in accordance with the requirements of the Safety Authority guidelines. The site is a sedimentary rock outcrop consisting of a semi-permeable layer (the white sands of Aptian) covering an impermeable layer (clays of Aptian). The topography of the site exhibits a gentle slope oriented towards the creek named “Noues d'Amance” draining all the underground flows of the zone.

The repository is designed to dispose of one million cubic meters of short-lived low or intermediate-level radioactive waste. Since its launch in 1992,  over 393 000 waste packages have been disposed of in the CSA (data of December 2018).

Disposal vaults are constructed in batches as operations progress. A batch corresponds to the construction of several rows of vaults (4 to 5 vaults in general per row).

Thus, it is possible to anticipate the time and the number of new vaults to be constructed according to the forecast of expected deliveries and to implement, as the case may be, new technologies elaborated on the basis of operational feedback and the acquisition of new technical and scientific knowledge. At the end of 2018, 180 vaults were built, out of which 143 are completely filled and closed, 7 - in operation and 30 - empty waiting for operation.

The CSA facilities include:

A special feature of the CSA is the underground Gravitational Separation System (RSGE) similar to that in service at the CSM. This drainage network aims to collect  potentially radioactive liquid seepage that comes mainly from meteoric water  infiltrated into the disposal vaults that may have been in contact with waste packages. Such potentially contaminated water is collected via the pipeline system located in underground tunnels that pass under the vaults. This water is retrieved for control and testing. In addition, two tanks of 250 m3 each able to collect large quantities of water in the monitoring phase are connected to and located under the pipeline system.

Another network of water collection recovers the effluents produced in the technical buildings in the regulated area that are likely to be contaminated (so-called "A effluents"). The water is discharged into the storm basin after radiological control to verify their compliance with authorized release thresholds.

Active liquids that may be present in the waste drums at the time of compaction are not discharged into the environment. Called "radioactive liquid effluents B", they are subject to specialised collection procedure and disposal at an appropriate facility.

Aside these specific drainage and water collection systems, the site is equipped with the standard networks for the management of wastewater and rainwater.

Two types of disposal vaults are used in the CSA:

One row of custom-made vaults is dedicated to the disposal of reactor vessel heads that come from the EdF NPPs - these are large-size waste packages and do not correspond to the standard package dimensions. These vaults are smaller in size and accommodate 12 "vessel head" packages  each.

Other “non standard” waste packages, like lateral neutronic shields from Superphénix reactor, were disposed of in the CSA in standard concrete vaults.

disposal volume in a vault

The life phases of the CSA

The CSA has been operating since January 1992; it has taken over the disposal activity from the La Manche disposal facility CSM where operations ceased in June 1994. Given its currently available capacity and forecast of deliveries, the CSA could still be operated for about 50-80 years.

Following the disposal of the last package, the final cap will be built over the vaults,  thus limiting the flow of infiltration of meteoric waters into the vaults. This cover will be installed after backfilling the spaces netween the vaults at the end of the  operational phase.  The detailed design of the final cap is not yet defined. Currently, the reference concept provides for a composite layer of natural materials (clay, sand…) of an average thickness of 4 m covering the vaults.

Following the closure, CSA then will enter a 300-year monitoring period. 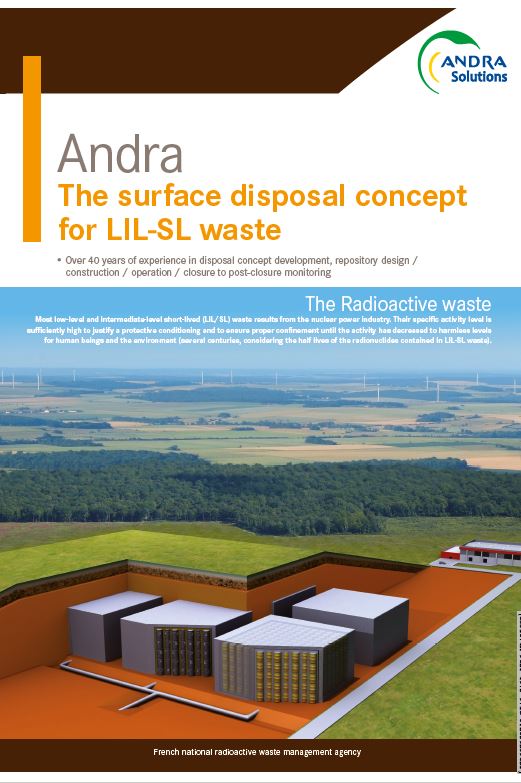