Curiosity was great at the laboratory when receiving the team from Nancy (France). Everyone wants to discover SPOT, a robot that looks like a big yellow and black dog.

Why a robot in the lab?

"Robotic systems could be very important in a complex and confined environment like Cigeo. They could be part of the auscultation and monitoring devices that will be deployed during the construction and operation phase of Cigéo," says Guillaume Hermand, instrumentation engineer at the Research and Development department.

The Underground Laboratory allows us to experiment with different robotic systems, as we do with the SAM robot dedicated to the inspection of the most radioactive waste storage cells. Today and tomorrow, we will be testing some of the capabilities of SPOT underground and with two students from the Ecole des Mines de Nancy working on it, aan engineering school partnering with Andra. "

Under the hood of SPOT

The arrival of SPOT is part of a long-standing collaboration between Andra and the Ecole des Mines de Nancy. Laurent Ciarletta, specialized in cyber-physical systems in applications including robotics, is carrying out various work with the Agency and had the idea to purchase this robot, manufactured by Boston Dynamics.

“It's a really well-designed robot. It integrates many behavior and moving functions and can be used as a support for different types of sensors. This will allow students to concentrate on programming more sophisticated functions. "More agile than robots on wheels, more maneuverable than mini-drones in an underground environment, more solid and versatile than" home-made "robots ..., SPOT also integrates a powerful computer, enabling capacities for acquiring and interpreting information of all kinds, in order to detect anomalies, for example.

At this stage, SPOT is primarily intended to conduct observation and control operations, particularly in areas less accessible to humans. "The agility of SPOT, for example, should allow it to move easily on the uneven ground left during the digging of galleries in order to take measurements as close as possible to the working face", explains Guillaume Hermand.

Other applications will also be tested, such as the possibility for SPOT to perform different types of measurements with on-board sensors or also to support certain maintenance tasks 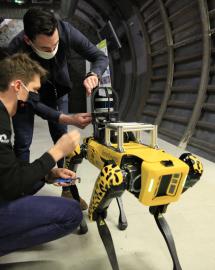 Two third-year master's students at the Ecole des Mines de Nancy and an engineer take SPOT to the mock-up gallery of the technological space. First step: install a scanner from the company Fugro, Andra's contractor intended to carry out measurements (relief, geology, etc.) on the working face of the galleries. Indeed, even if SPOT is already equipped with cameras on each of its faces, and sensors measuring force, acceleration, speed and orientation, the interest is to be able to improve its perception of the environmentt thanks to new sensors of different types. 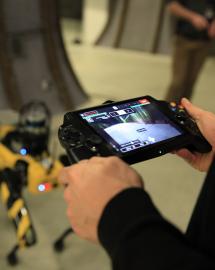 First tests of movements in the model gallery. Move forward, backward, turn, lie down, get back on his feet, run, go up and down stairs, but also avoid obstacles and not step on your toes ... SPOT is particularly agile. It is controlled by a remote control. But he can also embark a 3D mapping of his environment and navigate alone by finding his way regularly thanks to QR codes placed on his route. To develop its autonomy, students will have to program it using artificial intelligence. 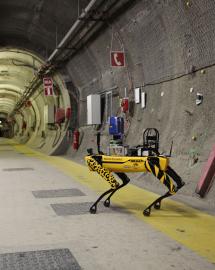 Later, SPOT is cleared to descend into the Underground Laboratory after security checks. Equipped with his scanner, he quietly discovers the place. 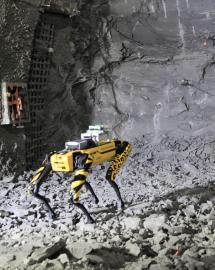 Will SPOT be able to stabilize on the cuttings of the working face? No problem. Thanks to the force sensors installed at the end of its legs, it can face unstable, loose or stony environments. Also, even if it did fall, its body is very solid and it would come off with a few scratches. But for the test, the team preferred to remove the scanner intended for measurements ... because the latter is much less resistant to shocks than SPOT.

Teacher-researcher at the LORIA laboratory, associate-professor at the Ecole des Mines de Nancy, Laurent Ciarletta, specialist in cyber-physical systems in robotics applications, has been working with Andra for several years. This context helped accelerate the acquisition of SPOT.

"When he arrived at school in September, the engineering students very quickly adopted the robot that they customized and called SCAR. It serves as a support for the courses and projects in the first and second years, especially on the artificial intelligence programming in all kinds of fields: arts, personal assistance, surveillance ... But we also have some third year students who go much further. Thanks to Andra, they have the opportunity to work on real projects, with industrial issues, which is very motivating. In order to support ambitious projects over the next five years, we have also set up a training chair in robotics in complex environments with Andra. "

A Ballet of Robots

Boston Dynamics, the company that makes SPOT and other robots, came up with an original greeting video that has tens of millions of views on YouTube: A Ballet of Robots.