Unraveling the mysteries of the universe, its origins, its evolution, such are the great challenges of CERN, the European Organization for Nuclear Research. Within its laboratory, complex installations, such as particle accelerators have enabled significant advances in science. Their operation can lead to the production of radioactive waste, which is partly disposed of by Andra. 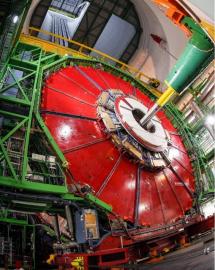 Located on the border between France and Switzerland, CERN is the largest particle physics laboratory in the world. Here, scientists from all over the world work in extraordinary facilities, where most of the experiments take place underground. Using particle accelerators and huge detectors, physicists at CERN study the fundamental constituents of matter to better understand the origin of the universe.

With a circumference of 27 km, the Large Hadron Collider (LHC) at CERN, the most powerful accelerator in the world, is impressive both in terms of its size and its operation: in its circular ring, which is made up of more than 1,200 superconducting magnets cooled with liquid helium, protons circulate at a speed close to that of light and collide (several hundred million collisions every second) in conditions similar to those that followed the big bang, at the origin of the universe. It is the particles created during these collisions that interest scientists.

Experiments at CERN have led to the discovery of new particles, such as those involved in the weak force mechanism, the force that causes nuclear fusion in stars and radioactivity. In 2013, two theorists, François Englert and Peter Higgs, were awarded the Nobel Prize in Physics after CERN demonstrated the existence of the Brout-Englert-Higgs boson. This boson is an elementary particle involved in a fundamental mechanism explaining why other particles such as protons or electrons have mass. This mechanism is the keystone of the standard model.

Experiments at the origin of radioactive waste

The operation of CERN's accelerators and the experiments carried out there result in the production of radioactive waste, in particular very low-level waste (VLLW) and short-lived low- and medium-level waste (LILW-SL). "This waste comes essentially from preventive and corrective maintenance operations. Most of it is made up of components, mainly metal, air filters, and technological waste (gloves, suits, etc.). There is also a large quantity of cables, which are used, for example, to supply the accelerators with electrical current. Not to mention dismantling waste, such as concrete walls or floors, when experiments are modified or replaced," explains Gérald Dumont, head of the radioactive waste management section at CERN.

Under a tripartite agreement signed in 2010 between France, Switzerland and CERN, radioactive waste produced by the Organization is taken care of by the two host countries, according to the channels set up and in compliance with their national legislation (see box). "This principle is defined in the agreement and its implementation is specified in decisions that can be revised if necessary. The latest decision of March 2022 clarifies the distribution of L/ILW between the two countries; it also completes the monitoring indicators that make it possible to measure the distribution," explains Gérald Dumont.

In France, CERN calls on Andra to take care of its TFA waste at the Centre industriel de regroupement, d'entreposage et de stockage (Cires). "Since 2012, Andra has disposed of more than 2700 m3 of TFA waste from CERN, and we are working with them to dispose of  their LILW-SL waste at the Centre de stockage de l'Aube (CSA) in the near future. Some of the metal waste will arrive in the form of ingots after melting at the Centraco plant (in the Gard region of France); others will be packaged directly in injectable containers before being transported to the CSA," explains Jean-Baptiste Rioual, Andra's business manager.

CERN is also taking a proactive approach to the management of its future waste. Together with the Agency, it is studying solutions to reduce the production of radioactive waste as far upstream as possible and facilitate its management downstream. "For example, this involves choosing the most appropriate types of materials for the components that make up CERN's various facilities. We are also working to ensure that certain specific components that will be disposed of are designed to meet the acceptance criteria of Andra's disposal facilities, and we are working to reuse activated components as much as possible to minimize the amount of radioactive waste produced," concludes Gérald Dumont.

CERN, probes the fundamental structure of particles that make up everything around us. They do so using the world's largest and most complex scientific instruments.

Find out more about CERN

An equitable sharing of radioactive waste between France and Switzerland

The Federal Office of Public Health (FOPH)(1) for Switzerland and the Nuclear Safety Authority (ASN) for France recently specified the terms of this distribution in a decision dated March 14, 2022. This decision maintains the disposal to Switzerland of waste that has become non-radioactive (after unconditional release) and to France of TFA waste. CERN also produces small quantities of L/ILW, the most radioactive and long-lived of which are destined for disposal in the future deep geological repository in Switzerland(2) , while the least radioactive L/ILW that meets Andra's criteria for short-lived L/ILW is destined for the Centre de Stockage de Surface (CSA), in France

Distribution indicators are periodically examined during tripartite meetings between CERN, the ASN and the FOPH; they make it possible to compare and measure the distribution of CERN radioactive waste between France and Switzerland.

(1) The FOPH is responsible for the control of Swiss nuclear facilities for medical, industrial and research activities, as well as for the management of radioactive waste from this sector.
(2) In Switzerland, all the country's radioactive waste will be disposed of in a deep geological repository.