The other waste management strategies examined

Before the choice of deep geological disposal for the management of the most radioactive and long-lived waste was enshrined in the Act of 2006, two other management strategies were examined: partitioning / transmutation and long-term storage.

In 1991 the French parliament started to address the problem of managing radioactive waste, passing the “Bataille Act” of 30 December 1991. This Act set the main priorities for research into managing the most highly radioactive waste. Three areas of research were identified: partitioning / transmutation, long-term storage and deep geological disposal.

ASN Opinion on the three areas of research

“It is the view of the ASN that the technological feasibility of partitioning and transmutation has not yet been demonstrated. Even if the solution were implemented, it would not be possible to completely dispose of the high-level long-lived radioactive waste generated. Another reference solution must be found.”

“It is the view of the ASN that long-term storage cannot provide a permanent solution for the management of high-level long-lived radioactive waste.”

"The Dossier 2005 Argile report submitted by Andra to its supervisory ministries in June 2005 has been reviewed by IRSN and is the subject of an opinion delivered by the expert advisory committee on radioactive waste management during its session of 12-13 December 2005. These reviews reveal that key results related to the feasibility and safety of a waste repository have been obtained at the Bure site. It is the ASN's view that deep geological disposal is the only disposal solution possible”.

Research into partitioning and separation was assigned to the CEA. The results of these studies concluded that these techniques will only be applicable to certain radionuclides contained in the waste: minor actinides (americium, even curium and neptunium).

Partitioning and transmutation is a technique whereby chemical separation processes are used to extract actinides and convert them, through a series of nuclear reactions, into fission products similar to those resulting from uranium fission (such as caesium-134 and -137, iodine-129, selenium-79, strontium-90 and technetium-99). This would also require new nuclear facilities which would themselves produce waste which would also require to be disposed of at depth. Partitioning and transmutation does not therefore eliminate the need for deep disposal.

The Planning Act of 28 June 2006 stipulated that the studies and research on partitioning and transmutation had to be conducted in connection with studies and research on new generations of nuclear reactors as well as accelerator-driven waste-transmutation reactors in order to obtain an assessment of the industrial opportunities offered by these systems by 2012 and put a prototype facility into operation by late 2020.

The CEA has therefore been studying methods for removing minor actinides from waste (primarily americium, the main source of heat emitted by wastes over the long term) and submitted report on the industrial opportunities of this technique to the Government in late 2012 .

Andra submitted a report on the studies and research on storage to the Government in late 2012.

Research into long-term storage was also assigned to the CEA which studied surface and near-surface long-term storage designs. After 15 years of research, the CEA concluded that "Although the facility designs are particularly robust against external technical or man-made hazards, such facilities must be surveilled and monitored throughout their entire useful lives in order to guarantee the retrievability of the waste packages emplaced in them. Indeed, whatever the construction arrangements taken, when such storage facilities reach the end of their useful lives, the packages in them will have to be retrieved for possible reconditioning and new storage facilities to house these packages will have to be built."

ASN, the French nuclear safety authority, considers that: “long-term storage is not a permanent solution for the reasons that it requires sustained monitoring by society and passes on the burden of dealing with wastes to future generations, neither of which are easy to guarantee across periods of several hundred years “ (Opinion of the ASN of 1st February 2006 on research carried out under the Act of 30 December 1991 (Bataille Act)).

In accordance with the wishes of the stakeholders of the Meuse and Haute-Marne departments, Cigeo will not include storage facilities which could replace those of the generators, in particular for the cooling of HL waste. Only a limited buffer storage capacity for controlling flows is planned on the Cigeo site.

Research into geological disposal calls upon various disciplines and covers different aspects, beginning with knowledge of the waste and the rock, but also including the design of the repository, monitoring and the transmission of memory. 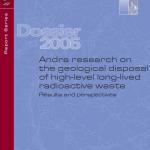 The Dossier 2005 submitted to the French authorities consists of 10 reference knowledge documents containing all data available in 2005 for the feasibility demonstration of Geological disposal in Clay (Argile) and in Granite.

Knowledge of the geological environment and the host rock

The gradual choice of location for the Cigeo facility is based on a detailed knowledge of the geological formations (geometry, stability, homogeneity, continuity, etc.), and in particular of the Callovo-Oxfordian formation, the rock that will house the repository, called the "host rock”. This characterization of the geological medium is based on studies at various spatial scales (from the regional to the site scale), boreholes, geophysical measurements and observations made in the Underground Laboratory.

Once the Meuse / Haute-Marne site was chosen, research was carried out to further improve the knowledge of the characteristics of the host rock, its ability to contain radioactive elements and the capacity to construct underground structures within this rock.

Containment properties of the rock

In order to assess the movement of radioactive elements  in the rock, Andra has conducted studies of the following:

The conclusions of all these studies are that:

Damage to the rock following excavation

Studies have been carried out into the response of the rock to excavation, primarily through tests performed in the Underground Laboratory. Since the excavation of the laboratory shafts up to the underground drifts and disposal cell demonstrators, different  liners and support structures and different diameters of  et different structural diameters were tested. This made it possible to check, one meter at a time, that the rock was uniform and had not been altered by natural phenomena such as earthquakes or glaciations. Sensors were also installed in boreholes several meters long, around structures, in order to continuously measure the deformations and cracks appearing in the vicinity of the structures during and/or after their excavation.

The information obtained provide a map of the damage to the rock in the immediately around the structures. This damage leads locally to increased permeability of the rock. In order to prevent any possible circulation of water in these damaged areas of rock, tests have shown the efficiency of a plug formed of swelling clay (bentonite). Other experiments also revealed a special characteristic of the host rock: when it is fractured it gradually self-seals due to the swelling of part of the clay minerals it contains, leading to the fractured rock regaining a low permeability. The zones damaged by excavation are regularly monitored to see how they change over time and according to the orientation the drifts.

Behavior of the rock following heating

Andra carried out research to understand the hydro-mechanical behavior of the rock when it is subjected to an increase in temperature and in particular check that there is no effect on its containment properties. High level radioactive waste gives off heat (which reduces over time with radioactive decay) and therefore their emplacement in the repository will lead to a transient increase of temperature in the rock.

This research in involved experiments which were carried out, primarily at the Underground Laboratory. The principle was to simulate the heating using heating elements and to measure the hydro-mechanical behavior of the rock via sensors positioned at their periphery. These experiments showed that there was no damage to the rock due to temperature.

In order to design a repository that is safe from the moment of its construction and over the very long term, Andra is carrying out research and conducting technological tests on the methods of storage, the structures and the behavior of the storage over time. The objective is to control the evolution of the waste, as closely as possible, ensure safety during the whole of the operation and preserve the geological medium so as to limit the release of radioactive elements over the long term.

Research is being carried out on the choice of the best material formulations (steel, concrete, clay), the definition of the methods for their implementation, as well as the characteristics of the structures to be built (thickness, density, etc.).

Numerous technological tests have also been conducted, in the Underground Laboratory and surface laboratories to test the industrial solutions which could be used to build, operate and close the repository (container manufacture and disposal cell construction tests, package handling tests, tests of monitoring methods, etc.).

Finally, once all the waste packages have been disposed of, Cigeo is to be closed in order to ensure the protection of humans and the environment, without human intervention. Andra has set up an important test program to verify the feasibility of the seals A full scale industrial test has been carried out to test, at the scale of Cigeo, the construction of a swelling clay-based core with its concrete containment structures. This test was conducted with European cooperation. A number of tests at different scales are also in progress at the Underground Laboratory.

These processes have been reproduced through experiments, primarily in the underground laboratory and simulated in order to assess how they evolve over the long term.

Monitoring of the repository and its environment

The monitoring of the behavior and the changes in the repository during its operation is essential for ensuring safety. Studies and tests have been undertaken, primarily in the Underground Laboratory, in order to identify the parameters to be monitored, to ensure the redundancy, complementarity and robustness of the measurement system, and to provide discrete stand-alone sensors that are robust over time.

The transmission of memory

In addition to the technical works, human and social science research is being conducted on intergenerational transmission of knowledge and understanding long time scales and memory.