Very long-term protection for humans and the environment

Cigeo’s safety relies to a large extent on the geological formation within which the underground facilities will be built. This formation, which has been stable for more than a hundred and sixty million years, has containment properties that can slow down the migration to the surface of the radionuclides contained in the radioactive waste. Its safety also relies on design choices such as:

To ensure the disposal facility will be safe, Andra based its design on methods and analyses from the nuclear industry as well as from sectors that involve underground work (mining, tunneling, etc.) and extensive international feedback.

ASN OPINION ON THE SAFETY OPTIONS FOR CIGEO

In its opinion of 11 January 2018, the French Nuclear Safety Authority (ASN) considers that "overall, the project has attained a satisfactory level of technological maturity at the Safety Options Report stage".

Andra had submitted the Safety Options Report for Cigeo to the French Nuclear Safety Authority (ASN) in April 2016. This report presented the main safety choices guiding the project design, which are based on more than 20 years of regularly reviewed scientific and technical research. The Safety Options Report was produced, in particular, to firmly establish the principles, methods and main design choices necessary for the forthcoming safety demonstration, which will be presented in the construction license application file. This application file was examined by the ASN, which called upon the IRSN, multidisciplinary advisory committees and an international review coordinated by the IAEA.

Excerpts of the Report:

The review focused on the strategy for research & development and knowledge acquisition, as well as the approach for defining scenarios for operational and post-closure safety assessment. It also addressed the approach for post-Fukushima actions....

A safe repository during operation

Cigeo's primary function is to confine the radioactivity contained in the waste, and this must be guaranteed throughout the entire operation phase, including incident and accident situations, should they arise.

The packages are the first barrier that retains the radioactive particles.

In the ramp and transfer drifts, these packages are placed inside a cask, which is the second envelope protecting the packages against hazards (dropping, fire, etc.). In the disposal cells for intermediate-level long-lived waste, high-efficiency filters ensuring that, even in the event of an accident, radioactive particles are not dispersed into the environment.

For every risk identified during the operational phase, the design of the repository incorporates several lines of defense to prevent or neutralize that risk: 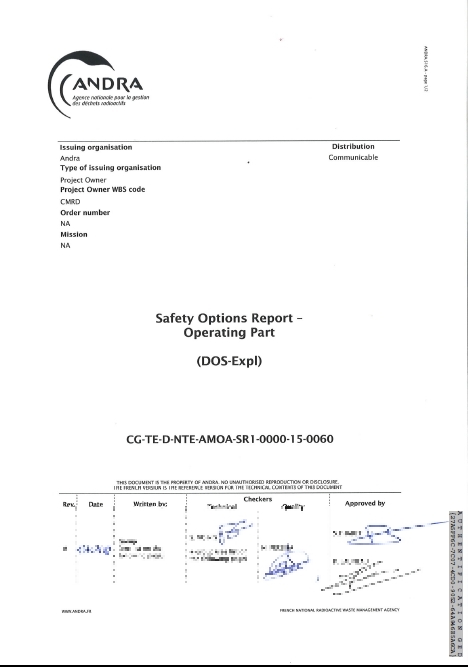 Safety Options Report: Operating phase The Safety Options Report – Operating Part [DOS-Expl] presents the functions performed by the Cigeo repository during the operating phase, the main technical options and safety options planned to prevent the various internal and external risks and a preliminary estimate of the impact on human health and the environment during normal operating as well as in the event of incident or accident situations.

A safe repository after closure

The long-term safety of the repository, in other words its ability to protect Humans and the environment over the period of several thousand years during which the waste remains hazardous, depends in particular on the choice of geological medium and the design of the repository. For this, the role of the repository is to isolate the waste from the surface and confine the radioactivity deep in the ground, even in the event of contingencies or accidents.

Safety Options Report: Post-closure phase This document presents the safety options proposed to ensure Cigeo meets its objectives in terms of post-closure safety. Its main purpose is to:
-describe the post-closure objectives, principles and safety functions of Cigeo and to highlight how these are taken into account in the project design and the choice of site, and particularly how the favourable characteristics of the Callovo-Oxfordian clay rock contribute to this;
- show that technical solutions exist for the closure structures;
- show that any uncertainties have been identified and taken into account by the design and the safety analysis;
- present a list of the scenarios chosen for the safety analysis and their classification in response to the safety guide for the geological repository (1) and in compliance with international practices;
- present the radiological impact of the disposal facility on its completion on the environment and humans for the main scenarios considered.

Isolating waste from the surface

Geological disposal serves to isolate the waste from surface activities: the repository will be located at a depth of about 500 meters. This depth protects it from the effects of phenomena such as erosion or glaciation, which will only affect the ground to a depth of less than 200 meters over a timescale of hundreds of millions of years, as well as attack by humans.

The second function of the disposal facility is to confine the radioactive substances. The way in which the underground facility is organized and the design of some of its components, such as the packages and seals, help to contain the radioactivity.

Confinement in the long term relies on the characteristics of the clay formation in which the disposal facility will be built. Design choices therefore seek to limit disturbance to this rock. This means, for example, favoring construction methods which limit damage to rock, and limiting residual voids in the repository (backfilling drifts), chemical disturbances related to repository materials or any rise in temperature, in order to maintain the rock's properties.

To ensure that the disposal facility will remain safe whatever happens, all phenomena that could degrade its performance and affect its safety are taken into account (earthquake, erosion, intrusion, etc.) and their consequences evaluated. For example, studies have shown that Cigeo would withstand the strongest earthquake that is geologically possible in the stratum where it is located.

Impact of the facility

Like any nuclear facility, Cigeo will be a source of radioactive releases.

Following the closure of the disposal facility, safety assessments have shown that the very long term impact will remain well below that of natural radioactivity, even in a degraded situation (e.g. an intrusion).

Whole-life monitoring of the repository

A monitoring program will be implemented at Cigeo as from the construction phase and throughout its operating life, to keep track of repository safety-related parameters, such as machinery speed, hydrogen concentration, HEPA filter performance and ventilation air, etc.

In addition to monitoring in the strict sense of the term, parameters affecting the evolution of the repository over the medium- and long-term will also be tracked and observed, such as ambient air temperature, changes in diameter of engineered structures (convergence of tunnels), strength of concrete, corrosion of steels, etc.

Monitoring of reference packages and reference structures representative of the different components of the repository, such as seals and cells, will also be carried out. These structures will be equipped with many instruments to allow detailed monitoring of their behavior and changes over time. Tens of thousands of sensors will be installed in Cigeo

The planned monitoring equipment includes existing sensors already in use in the nuclear industry and civil engineering works, where significant experience feedback is available (after decades of use on nuclear reactors, dams, etc.), and innovative equipment being developed through scientific and technological research programs.

Like any other nuclear facility, Cigeo will be subject to regulatory monitoring.

Andra also set up the “Perennial Observatory of the Environment” (OPE) in 2007. The OPE helps establish the initial state of the current environment prior to the construction of the repository and will enable us to monitor its evolution during Cigeo's construction and throughout its operating life.